Events and news of interest from around the Grand Canyon and Las Vegas! 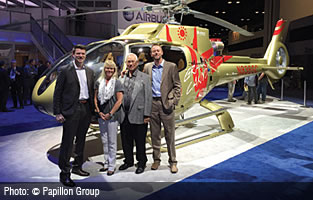 GRAND CANYON SOUTH RIM, ARIZONA - Papillon Group is celebrating 50 years of scenic flights in and around the Grand Canyon and unveiled its "Golden Helicopter" at Papillon's Boulder City Aerocenter in a five helicopter formation. After the helicopters landed, members of the Hualapai Indian Tribe, a partner of the Papillon Group, blessed the golden 50th Anniversary helicopter. On board will be three generations of the Halvorson family, including Elling Halvorson, chairman and founder of scenic flight tour group... Read Complete Article » Visit Papillon Helicopters Website! 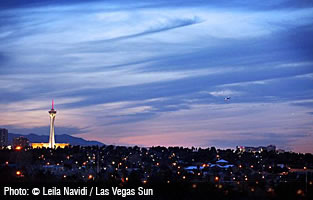 The view of the Las Vegas Strip seen east from Mountain Vista Street at Whitney Mesa Drive in Henderson.

The 7 best places to propose in Las Vegas

Before you pop Champagne, you have to pop the question!

LAS VEGAS, NEVADA - A proposal involving a helicopter might seem like a scene out of reality TV, but according to Papillon Helicopters, it’s not that uncommon. Raul De La Cruz, marketing supervisor for Papillon Helicopters, said groom-hopefuls have popped the question aboard helicopters circling the Las Vegas Strip and at the base of the Grand Canyon. This grand gesture comes at a price, though. The Vegas Strip Tour is $104 per person or $624 total to charter the helicopter... Read Complete Article » View Las Vegas Proposal Ideas! 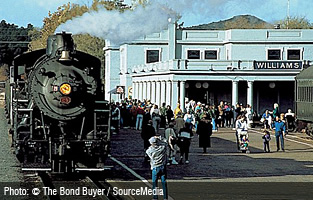 'Gateway to Grand Canyon' Aims to Take Tourists for a Ride

Williams, home of the Grand Canyon Railway, is developing plans for a theme park that could cost $400 million.

WILLIAMS, ARIZONA - The "Gateway to the Grand Canyon," is developing plans for a theme park that could cost $400 million and help the town of 3,023 capture more revenue from the more than 4 million visitors to the canyon each year. Williams is the home of the Grand Canyon Railway, a 65-mile excursion train to the canyon's south rim. A $25 million Arizona State Railroad Museum would adjoin the amusement park, whose theme is yet to be determined... Read Complete Article » 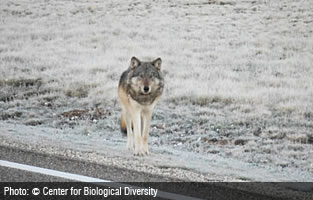 State and federal officials are trying to determine if this animal, which has been spotted several times north of the Grand Canyon this month, is an endangered gray wolf.

Fish and Wildlife officials hope to collect scat from wolf or wolf hybrid to determine species.

FLAGSTAFF, ARIZONA - Federal officials said Thursday they are trying to determine whether a wolf-like animal repeatedly spotted in an area north of the Grand Canyon is an endangered gray wolf, as environmental groups believe. A visitor to the area first spotted the animal Oct. 4. The animal would be the first gray wolf in that part of the state since the 1940s, if officials can confirm its species. "It would be premature to say whether it is a gray wolf, a wolf hybrid or, least likely, a Mexican gray wolf," said Jeff Humphrey, a spokesman for the U.S. Fish and Wildlife Service office... Read Complete Article » 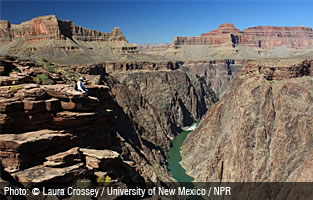 The eastern Grand Canyon was about half-carved (to the level of the red cliffs above the hiker) from 15 million to 25 million years ago.

Grand Canyon May Be Older (And Younger) Than You Think

In recent years geologists have hotly debated the age of the Grand Canyon. Some think it's young (just 6 million years old), while others argue that it dates back 70 million years - to the days of dinosaurs.

GRAND CANYON NATIONAL PARK, ARIZONA - Now one group says the Grand Canyon is neither young nor old. Instead, these geologists say, it's both. In the journal Nature Geoscience, Karl Karlstrom, of the University of New Mexico, and some colleagues describe a new creation story for the Grand Canyon. They think that about 6 million years ago, a river zigzagging a path across the Colorado plateau found part... Read Complete Article » 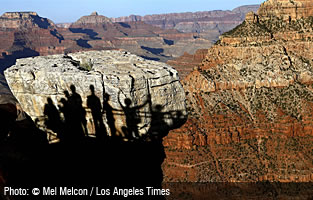 Visitors cast their shadows on a boulder while photographing the Grand Canyon from Mather Point.

At the rim of the Grand Canyon, busloads of Chinese tourists jostled on a recent day with twentysomething backpackers and an Amish family with rambunctious boys in suspenders and straw hats, all eager for a prime viewing spot.

GRAND CANYON NATIONAL PARK, ARIZONA - They gazed out on a dizzying sight of receding canyons and sheer rock walls, with the Colorado River cutting though the canyon floor a mile down. Generations of park managers have tried to preserve that natural vista, but officials here say a proposed development would alter the view... Read Complete Article » 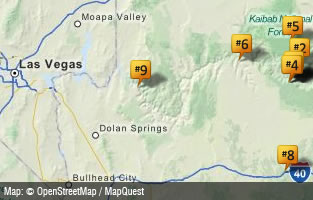 The Grand Canyon provides a variety of vantage points.

Best Things To Do in Grand Canyon

Even the most skeptical of travelers becomes awestruck at the sight of the Grand Canyon's massive expanse of gorges, ridges and rock formations.

GRAND CANYON NATIONAL PARK, ARIZONA - So simply enjoying the view - from a variety of vantage points - is an activity that could take hours. One of the best ways to see the canyon is on a hiking tour that takes you to the bottom: Some of the best trails include the Bright Angel or Rim trails on the South Rim. Rafting the Colorado River is another option; Travelers highly recommend O.A.R.S. for its excellent raft tours... Read Complete Article » 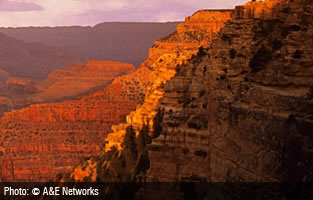 The Grand Canyon was first afforded Federal protection in 1893 as a Forest Reserve.

Located in northern Arizona, the Grand Canyon is known throughout the world for its size and colorful landscape.

GRAND CANYON NATIONAL PARK, ARIZONA - Measuring over 270 miles long, up to 18 miles wide and a mile deep, the canyon's walls contain rock layers that reveal a timeline of Earth's history. It has been a locale for human use and occupation for millennia, with ruins and artifacts from inhabitants dating back nearly 12,000 years, In the early 1800s, trappers and expeditions sent by the U.S. government began to explore and map the canyon. It was first afforded... Read Complete Article » 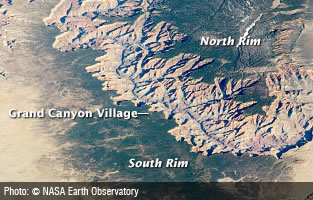 The Grand Canyon has become a geologic icon - a place where you can almost sense the invisible tectonic forces within the Earth.

The Grand Canyon in northern Arizona is a favorite for astronauts shooting photos from the International Space Station, as well as one of the best-known tourist attractions in the world.

GRAND CANYON NATIONAL PARK, ARIZONA - The steep walls of the Colorado River canyon and its many side canyons make an intricate landscape that contrasts with the dark green, forested plateau to the north and south. The Colorado River has done all the erosional work of carving away cubic kilometers of rock in a geologically short period of time. Visible as a darker line snaking along the bottom of the canyon, the river lies at an altitude of 715 meters (2,345 feet)... Read Complete Article » 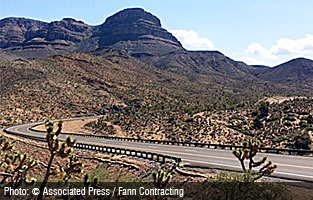 Paved stretch of road leading to the Grand Canyon Skywalk on the Hualapai Indian Reservation.

Officials from the Hualapai Tribe gathered Tuesday for a ceremonial grand opening of a road that had been a major headache for tourists headed to the Grand Canyon Skywalk.