"Absolutely unparalleled throughout the rest of the world... You cannot improve upon it. The ages have been at work on it... what we can do is to keep it for children, your children's children, and those who come after you as one of the great sights which every American should see."

The Grand Canyon is a unique, year-round vacation destination which has millions of facts, stories, history and geological areas to explore! Did you know the Grand Canyon is 277 river miles (446km) long and up to 18 miles (29km) wide, and is up to a mile (1.8km) deep in certain areas. Click to visit the National Park Service

How the Grand Canyon Formed

Explosive prehistoric volcanic eruptions, types of which can still be witnessed in the modern-day Hawaiian Islands, submerged much of the southwest United States under ash! Hot magma, flowing from the very depths of the earth's crust built massive stratovolcanoes. Violent volcanic eruptions submerged this region under ash, volcanic debris and lava flows. Deep underneath the volcanoes were magma chambers, pockets of molten rock, which fed the volcanoes above. As newer chambers and volcanoes formed, the older magma chambers cooled to form solid igneous rock masses called plutons. The development of the Grand Canyon began as weakened, stretched crust which was fractured and faulted. Giant blocks of the earth's crust slid down along the fault lines, creating basins which then filled with sediment eroded from the neighboring uplifted blocks as they subsided. Expansive lakes formed where the water was trapped by the massive newly developed mountain ranges. 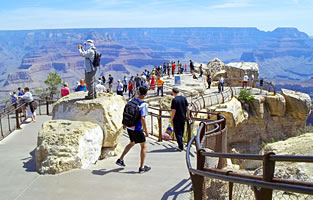 In some areas vertical strike-slip faults developed which slashed the earth's crust horizontally, moving gigantic blocks of rock miles from their original location. Tilting, uplifting, down-dropping and side-by-side movements along Lake Mead's countless faults has given its rocks the unique look that you see today. Around 13 million years ago, the crust had stretched and thinned as iron and magnesium-rich magma, basalt, began to ascend from the earth's mantle. The darker, less explosive lava produced many of the black volcanic flow-capped mesas seen in many parts of Lake Mead National Recreation Area.

In 1540, Spaniard Francisco Vasquez de Coronado was searching the Seven Cities of Cibola and its gold when Indians told him of a great river to the north. Under orders from Coronado, Captain Garcia Lopez de Cardenas, along with Hopi guides and a small group of Spanish soldiers, traveled to the South Rim of the Grand Canyon. They arrived at Moran Point 20 days later and found themselves at the edge of a great chasm - the mighty Grand Canyon. After three frustrating days searching for a way down the river Coronado and his men moved on, in search of other legends. The Grand Canyon and all of its splendor was then left to its original inhabitants, the Indians, and remained so for over three more centuries until 1869, when a one-armed civil War veteran Major John Wesley Powell set out with four boats to explore the mysterious Colorado River.
After losing two of this boats and three of his men, Major Powell eventually navigated the Colorado, reached the point where the Hualapai Indian Reservation and Lake Mead are today, 72 days later. Major Powell's published account of his journey encouraged scientific study of the Canyon.

Summer high temperatures within the Inner Gorge reach 100°F (37.8°C) and in winter sometimes fall below 0°F (−17.8 °C) along the Canyon's rim. Weather in the Grand Canyon National Park varies according to elevation. The forest-lined rims of the Canyon are at a high enough elevation to receive snowfall in winter months, but down in the Inner Gorge of the Grand Canyon along the Colorado River itself, temperatures are comparable to those found in Tucson and other lower elevation deserts locations in Arizona. Conditions in the Grand Canyon region are usually dry, but rainstorms do occur twice a year on average whenever Pacific winter storms deliver rain and higher-elevation snow to the region from the west coast and in late summers due to the North American Monsoon season, which delivers waves of moisture from the southeast, causing dramatic, localized thunderstorms fueled by the heat of the day. Average annual rainfall on the South Rim of the Grand Canyon is not more than 16 inches (35 cm), with 60 inches (132 cm) of snowfall. The North Rim which is at a higher elevation usually receives 27 inches (59 cm) of rain, and snowfall of 144 inches (317 cm).
Best prices on exciting Grand Canyon Adventure Tours!