Save now on the most popular Grand Canyon West helicopter tours, from the best sightseeing tour operators!

This discounted Grand Canyon Celebration Sunset helicopter tour with picnic lands you at the very bottom of the Grand Canyon and is a perfect sightseeing tour for both couples and family vacations! Return flight includes views of the Las Vegas Strip! 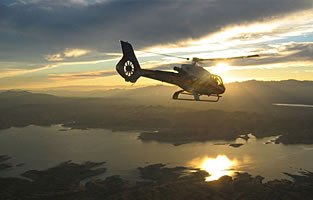 Best price guaranteed on this Grand Celebration sunset helicopter tour on which you can explore the Canyon floor, enjoy a delicious champagne picnic meal, then on your return fly over the Las Vegas Strip at twilight. Limousine transfers to most Las Vegas area hotels are also included.

Discounted sunset helicopter tour into the depths of the Grand Canyon, with a fun champagne picnic near the banks of the sparkling Colorado River, plus a dazzling flight over the Las Vegas Strip and limousine hotel transfers!

This affordable Grand Canyon Grand Celebration sunset helicopter champagne picnic landing tour and Las Vegas Strip flight adventure begins when a VIP limousine picks you up from your Las Vegas area hotel and you are chauffeured to the Las Vegas executive air terminal in style! Step aboard your EC-130 "Eco-Star" jet helicopter, sit back and enjoy the unparalleled bird's eye views of the massive Hoover Dam, deemed one of the Top 10 Construction Achievements of the 20th Century, and the Mike O'Callaghan - Pat Tillman Memorial Bridge spanning high above picturesque Black Canyon, a favorite Colorado River rafting spot, see panoramic views of shimmering Lake Mead, one the largest man-made lakes in the United States, all while comfortably flying to the Grand Canyon. After your helicopter passes over the West Rim of the Grand Canyon, the Hualapai Indian Nation's home, you'll begin a breathtaking 4,000 foot descent into the mysterious Grand Canyon itself all the way to its very floor. During this incredible descent you'll see the towering ancient rock formations of the Canyon's walls as the softly flowing Colorado River shimmers below. After your helicopter softly lands on the Grand Canyon's floor you'll have an opportunity to explore and take postcard-perfect pictures, then enjoy a champagne picnic meal under a traditional Hualapai Indian shelter. For a perfect ending to your Grand Canyon picnic landing tour, this affordable Grand Canyon helicopter tour's departure from the Grand Canyon is timed with the beginning of the sunset and then includes views of the Las Vegas strip at twilight. Upon arrival back at Las Vegas your helicopter will do a fly-over above the world-famous Las Vegas Strip at twilight before landing at the executive air terminal where your chauffeured limousine awaits to take you back to your Las Vegas hotel. Book with confidence: Discount tour coupons are not needed for some of the cheapest tour prices!