Save now on the most popular Hoover Dam helicopter tours, from the best sightseeing tour operators!

This discounted Hoover Dam helicopter tour includes views of the mighty Hoover Dam and the Pat Tillman Memorial Bridge, sparkling Lake Mead and the picturesque Black Canyon and is a perfect aerial sightseeing tour for both couples and family vacations! 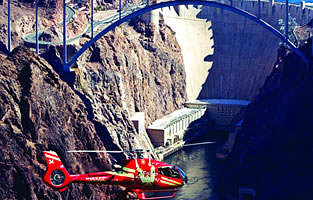 Best price guaranteed on this discounted Hoover Dam helicopter tour which features a deluxe state-of-the-art helicopter providing near 180 degree panoramic views as you fly at a low level over the mighty Hoover Dam!

Get the BEST Price on this Hoover Dam Bus & Helicopter Air Tour!

This Hoover Dam motorcoach and helicoter experience begins with shuttle service from your Las Vegas area hotel to our VIP terminal where you will enjoy a brief pre-tour orientation. You will then board your deluxe touring motorcoach which will then take you to historic Boulder City, home of the Hoover Dam. En route while on your motorcoach to Hoover Dam, you will learn intersting facts about scenic and local cultural highlights about this Southwestern U.S. area you are traveling through. Once you arrive at the Hoover Dam you will be met by a representative of the U.S. Bureau of Reclamation who will take you on a VIP Discovery Tour deep into the depths of the dam itself. This comprehensive tour covers the entire lower level of the dam. You will also be taken to the generator room and be shown the incredible infrastructure that creates power for several surrounding Southwestern states. The mighty Hoover Dam was the largest dam in the world at the time of its completion in 1935. Hoover Dam was designated a National Historic Landmark in 1985 and named one of America's Seven Modern Civil Engineering Wonders of the 20th Century in 1994. Built during the Great Depression, Hoover Dam was a marvel of engineering and labor. As the Great Depression unfolded, hopeful laborers descended on Las Vegas and set up camp in the surrounding desert for the chance to work on the project. Those who were hired eventually moved to Boulder City, a community specifically built six miles from the work site to house its employees. You will have to opportunity to learn their stories with a short but informative video presentation in the Visitor Center's movie room. There will also be plenty of time to explore and shop for souvenirs of your tour as well. Next it's off to the heliport where you'll board a state-of-the-art touring helicopter. Witness the immensity of the Hoover Dam and the winding Colorado River with the incredible bird's-eye views. Your Hoover Dam luxury helicopter flight features a climate controlled and comfortable state-of-the-art jet helicopter which has scenic windows providing you nearly 180 degree panoramic views through which you can take postcard perfect pictures of the Hoover Dam. Experience magnificent, near 180 degree panoramic views from the air of this engineering marvel rising 726 feet from its foundation. Along with aerial views Hoover Dam this fun and affordable helicopter tour includes views the Mike O'Callaghan - Pat Tillman Memorial Bridge and the picturesque and mysterious Black Canyon far below, see sparkling Lake Mead, one the largest man-made lakes in the United States. The approximate flight time is 6 minutes round-trip with headset narration. When your flight is complete, you will be taken to the Hoover Dam Lodge to enjoy a meal before being transported back to your Las Vegas hotel. Book with confidence: Discount tour coupons are not needed for some of the cheapest tour prices!

Book now for the best discounts on affordable Hoover Dam helicopter tours to the mighty Hoover Dam from Las Vegas!